Welcome to old and new friends who are interested in discussing Cajun and other diatonic accordions, along with some occasional lagniappe....

Not so much for me, but in playing, I get a strong resemblance with Bayou Pon Pon and the Wafus Two Step

Note that these two songs, as well as a few others I'll list below, are all derivatives of an old Appalacian folksong called "Rubber Dolly". These songs are like off-shoots from this extremely popular melody. I like this because it shows how American vernacular infiltrated the popular tunes of the 1920s in Cajun areas, each in their own unique way.

The first recording of this melody was by Angelas Lejeune in 1930. He got the name from Lafourche Parish comedian named Walter Coquille's radio program in which he jokingly referred to himself as the mayor of a fictional town called Bayou Pom Pom. The name Bayou Pom Pom (or sometimes spelled Pon Pon) refers to the bayou called Bayou Pompon, located east of the town of Chackbay. Although there is no such town, Walter used this for his comedy recordings in the 1930s and was there when Angelas recorded the song.

If you listen real close to Joe Falcon's "Osson One Step", you'll hear the same melodic pattern, just done in a different way. That would be followed up by Amede Ardoin's "Tortope (Two Step) D'Osrun". Same goes for Adam Trahan's poorly performed "The Waltz Of Our Little Town".
See: http://earlycajunmusic.blogspot.com/2016/10/osson-joe-falcon.html
See: https://earlycajunmusic.blogspot.com/2020/03/the-waltz-of-our-little-town-adam-trahan.html

In 1947, Harry Choates attempted to record the song "Bayou Pon Pon", but like much of Bill Quinn's misadventures in producing music, he accidentally swapped the song for a tune called Bear Creek Hop. Harry would go on to actually record "Rubber Dolly" that same year.
See: http://earlycajunmusic.blogspot.com/2019/03/rubber-dolly-harry-choates.html


There are other iterations of this title with Jimmie Davis and Harry Choates and Nathan Abshire, and many many others. 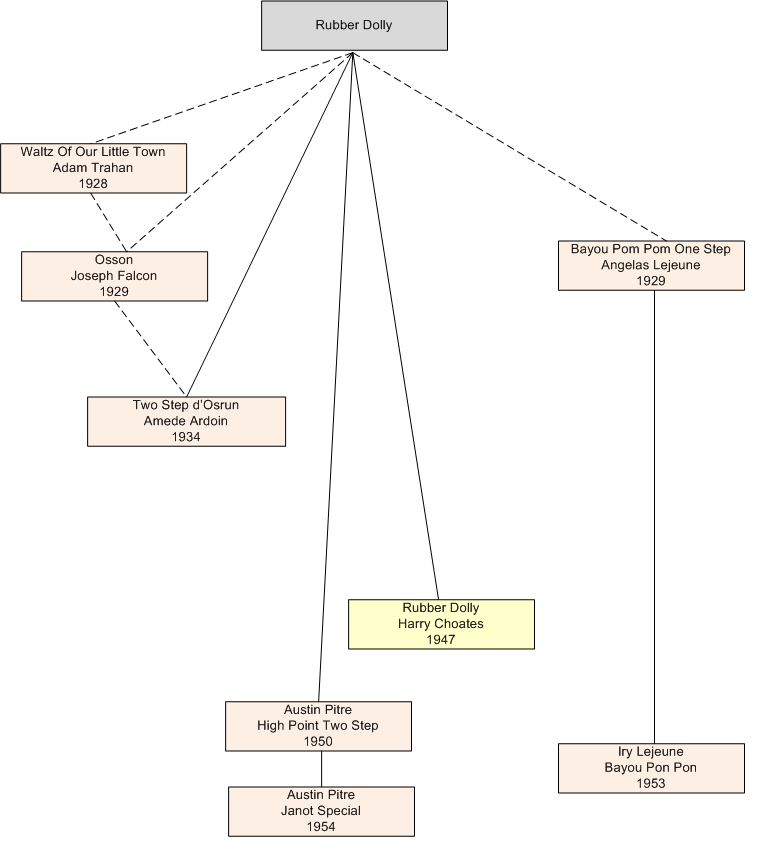 Brett's all new Cajun Accordion Music Theory for all keys!

Listen to Some GREAT Music While You Surf the Net!!
The BEST Radio Station on the Planet!